Former Simon & Schuster editor Marcela Landres offers advice to writers on editing fiction for better chances of success. Marcela Landres is the author of an e-book called How Editors Think: The Real Reason They Rejected You, and currently provides an editorial consulting service for authors.

A Conversation with Marcela Landres 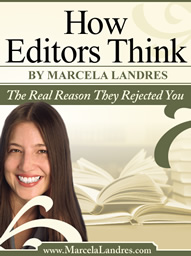 CWN: What are some of the most important aspects of a fiction manuscript for writers to look at during the revision stage in order to improve their chances at publication?

Marcela Landres: Writers commonly obsess over the beginning of their manuscripts, and rightly so. Not enough writers, however, invest equal time and effort in the ending. Also, many manuscripts would benefit from having a stronger beginning and ending for each chapter.

CWN: In your work as an editor, what are some of most common problems you've found in fiction manuscripts?

CWN: Could you talk about some of the problems you've seen in fiction manuscripts in terms of plot structure?

Marcela Landres: Writers sometimes focus on what characters think and feel. More often than not, this s-l-o-w-s down the narrative because action--what the characters say and do--is what fuels plot. During the revision process, get out of the heads of your characters and instead focus on their behavior. In particular, avoid scenes in which a character is alone. Conflict feeds storytelling, and is exponentially more likely to occur when there are two or more people in a room.

CWN: What types of problems have you seen in terms of character development?

Marcela Landres: Ideally, characters are multidimensional--the good guys have a dark side, and the bad guys have redemptive qualities. Occasionally, writers depict characters who are one-dimensional, either saintly or evil. Neither kind of character is compelling.

CWN: Are there any specific issues with dialogue that fiction writers should watch out for?

Marcela Landres: Great dialogue is rare. To paraphrase Stephen King from his brilliant guide On Writing, writers who do dialogue well are good listeners. If you can’t remember the last time someone complimented you on being a good listener, your dialogue likely requires sharpening. To this end, eavesdrop promiscuously. Carry a pad and pencil, listen closely to everyone you encounter, and take copious notes.

CWN: Do you have any advice for writers on revising to improve manuscript beginnings and/or endings?

CWN: Do you have any other words of advice for fiction writers who are in the process of revising a manuscript?

Marcela Landres: Solitude is good for writing, but not for rewriting. Writers need consistent, constructive feedback during the revision process, and the best way to get it is to join or form a writing critique group. Avoid readers who love you, who live with you, and/or who are not writers.

Return from Editing Fiction to the Creative Writing Ideas blog.


<< BACK from Editing Fiction to the Creative Writing Courses HOME