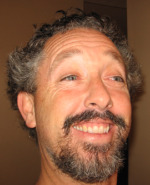 We asked Michael Klam about poetry slams, poetry translation, and his advice for beginning poets.

Michael Klam is Poet in Residence at Balboa Park's Museum of the Living Artist. He organizes the museum's Poetry & Art Series, including the 3 for $300 Poetry & Art Slam, and teaches for the Page to Canvas to Stage program funded by the California Arts Council. Michael's book Emma and the Buddha Frog is currently available from Puna Press.

A Conversation with Michael Klam

Q: Could you talk about what poetry slams are and how poets can find or organize poetry slams in their areas?

A: Poetry slam is generally a competition where writer-performers go head to head, earning points for engaging, entertaining and moving the audience. Five judges are picked randomly from the crowd. The slam host asks them to score on a scale of zero to ten -- a ten being a work of staggering genius, and a zero being the worst intellectual masturbation the judge has ever heard. This is all very subjective, of course. However, winning poets tend to be serious about their work and their messages, and their confidence (or bravado), along with their writing and performing skills, turn on both audiences and judges. The host encourages the audience to influence the judges (by applause, laughter, discord in the event of an injustice [Boo!], etc.) Often, there is a cash prize. To organize a slam, all one needs to do is invite the audience and the poets through social media and word of mouth. The slam requires a host, a scorekeeper and timekeeper, five judges, audience and poets. Check the Internet for what’s happening in your area.

Q: What qualities make a poem particularly suitable for performance? How can performance add a new dimension to a written poem?

A: Slam poems, by the rules, must be under three minutes and ten seconds. Spoken (or read out loud) poems are the only criteria, which means that everything is game. Poems that flow tend to score well, yet over-rhyming for three minutes can be a painful thing to launch on an audience. Subject matter is wide-open, free speech. Strong, unique metaphors work. Belabored or trite metaphors often score low. Writing a poem for performance pushes the poet to really consider audience in their use of voice, inflection, pacing and content; to fine tune the piece, edit, yet still remain true to herself or himself. I personally think the best poems are the ones that are the most sincere.

Q: In addition to writing poetry, you have also translated poetry. Could you talk a bit about the process of translating a poem?

A: The way I see it, the translator’s responsibility is to be true to the piece. Part of that responsibility includes capturing the heart and the mind, the creative force, the art behind the words. This is not always easy from one language to another. When I translated Miguel Barbosa’s poetry, I had the luxury (and luck) of spending months with Miguel in Lisbon. Getting to know him helped me see his playful side—he would get crumbs in his beard and call it a “barba scone.” I also translated Alberto Blanco’s La raíz cuadrada del cielo (The Square Root of Heaven) as part of a master’s thesis, after spending time with Blanco here in San Diego. His intellectual gravitas coupled with his inner love poet helped me understand why he chose to use math and quantum theory to discuss love and relationships. However, most translators rely on the poet’s work alone. In it, they find meaning, structure, the creative act that all started when a real, live human being decided organize her thoughts and write them down. Readers in a second language want to engage with those acts of creation. The translator is both a messenger and a new voice, charged with the artistic responsibility of remaining true to the original source.

Q: What advice can you offer to new poets just starting out?

A: Read, read, read. Go watch and listen to both developing and established writers, paying attention to their work while coming into your own. Rely on your most honest peers, holding dearly to their celebrations, and listening carefully to their criticisms. Be ready to try different approaches. I hate to lay a heavy trip on you, young poets, but great poetry takes time and work.

Read more about Michael Klam and his recent book on the Puna Press website.

Interview about Poetry Slams -- Next Steps

Did you enjoy this interview about poetry slams and writing poetry? You might also like our interview with Meredith Sue Willis on writing novels.

Click here to return from this interview on poetry slams to the Creative Writing Ideas blog.