How to Write a Story: Two Methods

This is Part 2 in our series on how to write a story. Click here to return to Part 1.

In Part 1, we talked about how to develop your story idea so that you have the three elements of a story: a character, a problem, and a setting.

Once you have those, what do you do next? The answer depends on what kind of writer you are.

Are you a "plotter" or a "pantser"? These are names for writers with two different ways of working.

Some writers like to plan out their stories in advance. They write outlines and take notes. These are the plotters.

Other writers prefer to improvise, to just start writing and see where the story takes them. These writers are sometimes called pantsers because they fly by the seat of their pants.

Neither approach is better than the other. If you don't know which kind of writer you are, try both approaches and see what works best for you.

I'm going to suggest different methods of starting a story for plotters and pantsers.


A method for plotters

You've got your character, your problem, and your setting. Now you're going to take the second element, the character's problem, and use it to start getting ideas for scenes.

For example, let's take the earlier example of a story about a gardening competition...

- You might have one scene where your character learns that her ex-husband will be competing and decides to compete against him.

- You might have another scene where she's planning her beautiful garden and worrying about when she'll find the time to work on it -- since she already has a full-time job and has to care for her elderly mother.

- You might have a scene where her ex-husband is unkind to her, which makes her want to win even more.

- You might have a scene where a neighbor who has won the competition the last three times offers to help your character win this year.

- You might have a scene where your character spots her ex-husband in a restaurant having lunch with the competition judge.

And there will be more scenes in the story, including the most important scene, which is the day of the competition.

Each of these scenes changes your character's situation in terms of her problem, which is how to beat her ex-husband in the contest.

You can write each scene idea on an index card and then keep rearranging them and filling in the missing pieces until you get the skeleton of your story.

You might want to pin these cards on a bulletin board. Or, once you're happy with the order, you can write a list of scenes on a page, and then you have a story outline.

Now, it's time to start fleshing out the scenes. For example, take the scene where your character's neighbor offers to help her win the competition. Where does that scene happen? Maybe your character is working in her garden, and the neighbor comes up the driveway to talk to her. What does the neighbor say? What does your characters say back? You'll want to include dialogue, actions, and descriptions to bring these scenes to life for the reader.

One important tip, whether you're a plotter or a pantser -- when you sit down to write, you don't have to begin with the first paragraph of the story. If there's another scene that you have clearer in your mind, you can start there, and then go back and write the beginning later. Don't feel that you have to write the story in order -- that's not always the easiest way to work.

A method for pantsers

We've talked about how plotters can get started on a story; now, I'm going to talk about what pantsers can do.

You're sitting in front of a blank page, and you don't know how to get started. But if you're a pantser, you probably don't want to begin writing on index cards or making an outline because you feel that doing so would stifle your imagination. That's fine.

If you're a pantser in this situation, your first job is to get something on that page, whatever it takes.

There are different techniques you can use to make that easier:

If you're a pantser, your first draft is part of your planning process. It's an exploration. For a pantser, the second draft -- or the third, or the fourth -- is where the story starts coming together.

Once you've gone through this initial process of letting your imagination flow onto the page, then you can go back and do the work that the plotter did ahead of time: figuring out what scenes need to be in your story, and the best order for those scenes.


How to write a story - Overview

Here's a quick overview of the process we've talked about.

If you're a pantser, you might work in the opposite direction. First you start writing to develop your ideas on paper, and then you go back and figure out what scenes you need in your second draft. 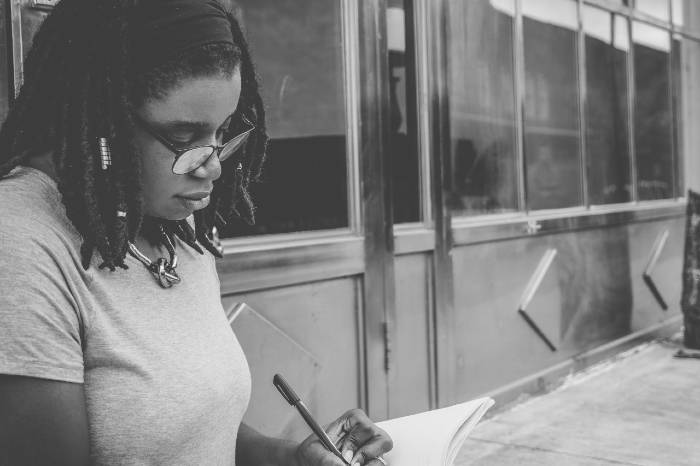 Tips on how to write a story

A few points to keep in mind.

How to write a story - Next steps

Develop your story in our online course, Story Structure.

Learn how to make your story a page-turner in our online course, Irresistible Fiction.